Moving Back to Korea 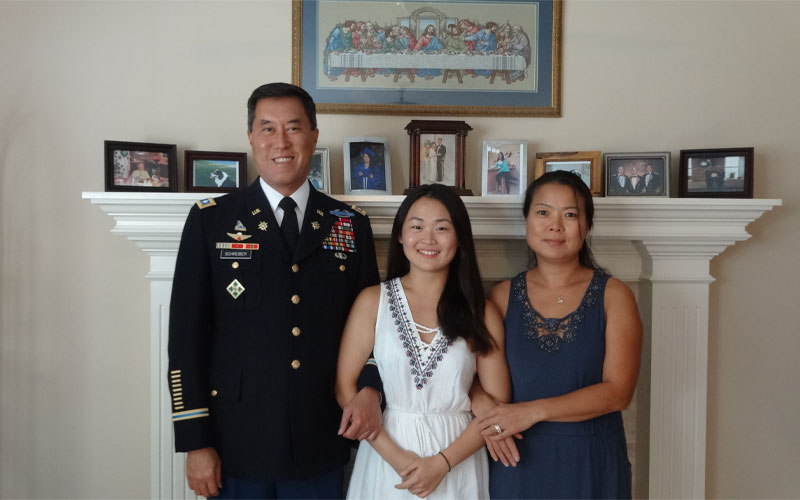 We’re posting this as a lesson for anyone who has any business before the Immigration Court and thinks there’s any room to accommodate mistakes – there’s a very nice family in Kansas who most likely will be moving to Korea soon that can dissuade you from any such ideas.

It starts with Lt. Colonel Patrick Schreiber of the U.S. Army. He is a 27 year veteran, highly decorated, served six tours of duty in Iraq and Afghanistan, the last in 2013 when he served as chief intelligence officer. Which is when the problem started.

Let’s back up for a second: Lt. Colonel Schreiber served in Korea before the second Iraqi War where he met his future wife, Soo Jin, a Korean National. They were married in Texas in 2000, Soo Jin became a U.S. resident.

Fast forward to 2012 when the Schreibers, who had never had children, welcomed Soo Jin’s niece, Hyebin, into their home. Hyebin’s father was unable to continue to take care of her, she came to live with the Schreibers while on a student visa. She was 15.

They made quite a family and it wasn’t long before the Schreibers put legally adopting Hyebin into motion, hiring an adoption attorney to make sure it was done quickly and efficiently. As the adoption was moving along, Lt. Colonel Schreiber was posted to Afghanistan. They consulted with the attorney, she told them, correctly, that “under Kansas law, it was fine as the cutoff date to complete the process is Hyebin’s 18th birthday.”

They put off the adoption and Lt. Colonel Schreiber went to war. When he returned, they immediately filed all the paperwork and formerly adopted Hyebin. She was 17. She received a new birth certificate with the Schreibers listed as her parents, as far as Kansas was concerned, everything was legal, official, the Schreibers were her parents. Forever.

Not long after, Hyebin was accepted at the University of Kansas where she is a science major. She is an outstanding student.

She is also on the verge of being deported. Her applications for a visa and her application for citizenship were rejected by immigration authorities. Under immigration law, “foreign-born children must be adopted before reaching 16 to derive citizenship from their American parents.” Period. There are no exceptions, as the District of Kansas federal court has made crystal clear. In their words, “the (immigration law) in question is not ambiguous.”

As it stands today, the Scheibers have lost their last appeal. Hyebin will be deported. The Schreibers have decided they are going with her. To live in Korea.

Two things to take from this. First, when people talk about the ‘brain drain’ in the United States, this is a perfect example.

Please . . . if you have any business in immigration court, consult an experienced immigration attorney and never skip on any of the paperwork.