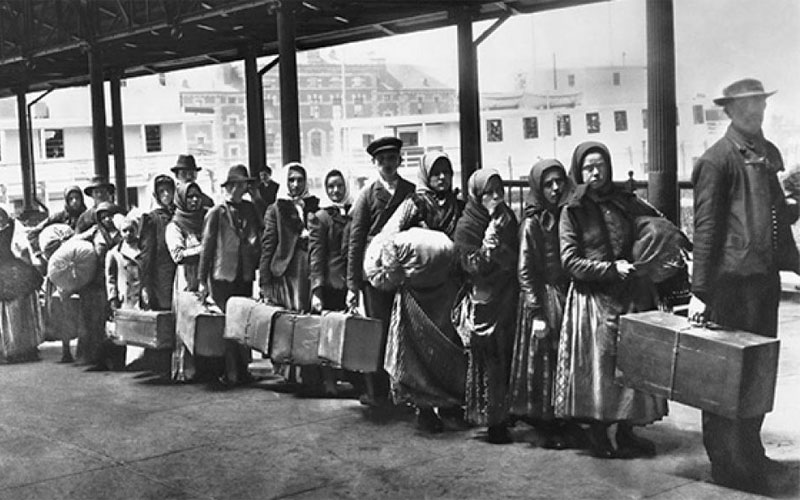 Every once in a while we write about history – because history and immigration are inexorably intertwined. In other words, as far as immigration in the United States goes, ‘everything old is new again.’  And, as with all history, the lessons are many.

A new book was released last month, The Guarded Gate, Bigotry, Eugenics, and the Law That Kept Two Generations of Jews, Italians and Other European Immigrants Out of America by Daniel Okrent. It has already generated a ton of news coverage.

It’s the disturbing story of this country’s first comprehensive immigration restriction law in 1924.* One based on the following:

Immigrants steal jobs from the native-born, they are costly to taxpayers, they don’t respect American values, and they are inclined to be criminals.

If that sounds familiar it’s only because it is.

This wave of anti-immigration sentiment started at the top with the (super) wealthy, the intellectual elite, and ‘scientists.’ They took the great advances in the studies of evolution and genetics and warped them to fit their view of immigration, which was simple and to the point in any event: the fewer the better and even then only ‘the best people’ from approved nations.

The logic was ridiculous on its face. It was also swallowed whole by swaths of America, rich, poor, middle class. A lot of people knew it was trash science, a lot of scientists were appalled, but virtually no one went public to dispute it. The people spewing the pseudo-science were too wealthy, too influential, to conflict with – careers would be destroyed.

F. Scott Fitzgerald ripped the movement in The Great Gatsby, his voice was one of very few. The House of Representatives voted 302-68 to pass the Immigration Act of 1924, the Senate by 69-9. Most of the nay votes were from representatives on the West Coast concerned that a further reduction in immigration from China and, especially, Japan would lead to a very real shortage of cheap labor and a hit to the fishing industry.

There was no push back in the courts for the simple reason no one turned to the courts to block any of it.

That’s the big difference between then and now, one hundred years on. The Immigration Act of 1924 had enormous effect on our history, none of it good. That much is recognized even as the Trump administration tries to recapture the feelings of the early 1900s albeit using different rationales.

But now, unlike 1924, there are checks and balances. There is vocal opposition in Congress. The Courts are involved. The media presents every side, it’s impossible to have a monopoly on information (which, in any case, is instantaneous).

Checks and balances. That’s important. Just as – yes, we say this a lot, but we have too, it cannot be overemphasized – is this: if you have a current immigration matter you must stay on top of it. Missing a deadline, a fee, mis-signing a form, missing a document, any of that in this current environment, is magnified and can be fatal to any case.

*The Chinese Exclusion Act of 1882 was exactly that, it only applied to China. The 1924 act was all encompassing.