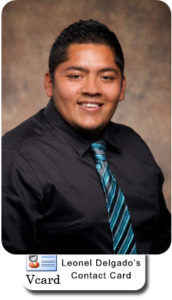 Leonel was born in state of Guerrero, Mexico and is from a small town called Vallecitos near Acapulco. He immigrated to the United States when he was nine years old with his three younger brothers.

They were fleeing the violence that was happening all around them and were trying to reconnect with their mother who left one year earlier to get established.

The trip coming across the border was intense for such young children. Their mother planned and hired a “runner” family to discretely take them across the border into California. It was 2:00 am by the time they arrived at the border and Leonel had to hide under a blanket because his description did not match that of the children of the runner. Listening through the blanket he could hear the conversation between border agents and the driver.

After they finally crossed, the first thing they did was go to a McDonald’s to get something to eat. That was the first-time Leonel ever ate a hamburger and experienced an American restaurant. Once in San Diego, they met up with Leonel’s step father who picked them up.

Leonel and his younger brothers embarked on the long bus trip ride from the southern border of California all the way up to Central Washington. Finally escaping the fear of violence so prevalent in his home town.

After two days of travelling on a Greyhound bus, Leonel and his brothers were finally reunited with their mother. The moment was surreal and he has never forgotten that feeling of being together again after such a long time without her.

Leonel’s mother had made a living working in the orchards of Central Washington and knew she needed to enroll her children in school before the year let out for the summer. Getting use to the culture and language was not easy and Leonel started school two days after he arrived.

He knew only Spanish and had a one month crash course in English before the school year ended. In the one month of instruction, Leonel picked up enough English to communicate with relative ease.

That summer, Leonel and his brothers started working in the orchards picking cherries and pruning trees. The days were very long for a 9 years old, he worked from 4am to 7pm with a one hour lunch in the middle. That pattern lasted until he was about 15 years old.

Leonel Delgado liked going to school, and his favorite classes were math and English. His recollection of that time was very positive; as he got older he was finally able to have more time to play. He got involved in sports and loved wrestling and basketball.After graduating from high school in 2012 he was accepted into Eastern Washington University. He was able attend because of his grades and was the recipient of agricultural scholarships that helped pay for most of his education.

Leonel majored in criminal justice, and was interested in drug enforcement mostly because of the negative memories he had about the corruption and “Narco” violence he witnessed at an early age. He is contemplating a career in law and is looking forward gaining firsthand experience working with immigration attorneys.

Speaking with Leonel you would never know he is originally from Mexico. His positive upbeat demeanor and can do attitude are the first things you will notice when speaking with this young man. He is a role model to his two younger brothers who are following in his footsteps and pursuing an education becoming outstanding citizens of the State of Washington.

Today, Leonel Delgado is working with Quiroga Law Office to complete the necessary steps it takes to become a lawful permanent resident. He also handles a regiment of administrative duties that are necessary to help keep this office running efficiently. He shares the compassion needed to be working for Quiroga Law Office, because we are here to help protect immigrants like ourselves!