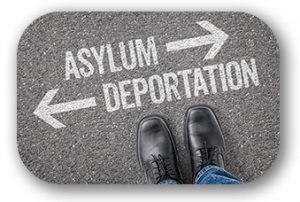 One of the special features of an asylum petition is that it is not only a request for a benefit. It can also be a ground for relief from removal (deportation). In essence, and at its core, an asylum petition seeks protection from persecution by others outside the United States. However, to be successful in an asylum claim, some elements must be present.

Making a petition for an asylum requires that the applicant demonstrates a well-founded fear of persecution based on one (1) of 5 enumerated grounds.

The applicant must show that one of these 5 enumerated grounds was or will be the central reason for persecution. When the application for asylum is made, the grounds for asylum must be particularized to the individual making the application. Trying to bootstrap a claim that may apply to all members of a particular class is not sufficient grounds for asylum. Neither are countrywide conditions that do not rise to the level of persecution based on race, religion, nationality, and membership in a particular social group or political opinion.

Asylum petitions based on race

To show a. the applicant can submit evidence of birth, or testimony by witnesses as to the affiliation. Applicants can also submit expert testimony by someone who is considered by the community as an expert in race relations.

To show b. the applicant must show that the attackers central motive was their race. This can be difficult to show in some cases as the applicant is placed with the burden of showing the intent of an attacker or a group of attackers. This evidence can be shown by testimony, newspaper articles, studies, police reports, lawsuits, etc.

Asylum petitions based on religion

Just as an asylum petition based on race, the applicant must show membership to a religion. This can be achieved by testimony of official church documents, or by letters of religious leaders documenting the applicant’s subscription to the religion.

The applicant must also show that the reason for the attacks or threats are motivated by the applicant’s practice of religion. As noted, this can be difficult to show as the applicant must show the intent of the attacker or group of attackers. In some circumstances, disputes that arise from different religious ideologies can be shown by historical evidence; however, the United States government and judiciary often require more direct evidence than solely a historical account of a dispute.

Asylum petitions based on nationality

Asylum petitions based on membership in a particular social group

Other recognized social groups have been found to be form on bases of sexual orientation, women of El Salvador, child soldiers, etc.

Asylum petitions based on Political Opinion

What are not grounds for asylum?

Economic conditions are not one of the five enumerated factors and are not sufficient in and of themselves enough to be considered grounds for asylum. Neither is prosecution (prosecution is different from persecution) in a foreign country.