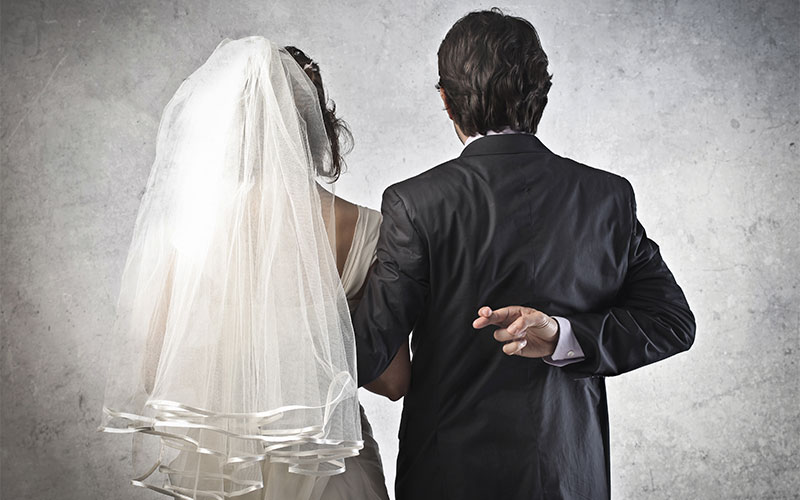 A fake marriage is the one celebrated without the complying with the requirements of the law of the state/city where it took place. This marriage is not born into legal life, it is no valid, it is FAKE.

The fake marriage, is linked to the marriage fraud, it’s not a real marriage, because it is made to obtain migratory benefit, it’s a marriage of convenience, is not a marriage made in good faith. The foreing people is looking for an easy way to get their Green card. This fake marriage is considere one of the most common ways of fake visas in the United State.

The marriage fraud, does no worth it. Is a big risk, which eliminate the legal possibility to make you a permanent resident in the United States, since the consequences are very serious because it is considered a federal crime. It is a crime against the American government, so that, there is a prison sentence up to 5 years and $250.000 USD fine. They can neither do other kind of residence petition in the United Stated, because you lose the opportunity, you could be deported and there is not forgiveness with the marriage fraud. The United States does not forgive the deceit, you will get a punishment by the law. Although to make a fraudulent marriage, both persons (the citizen and the foreign) have to know it is fake, they have to agree with that, most of the sanctions are for foreigners and if the citizen accepts the charges, they won’t go to jail, they will have a wake-up call; this is why the fake marriage is very common with the American people.

The current administration has been aware of this issue, and is looking at cases where a foreign marries an American, and they do it very quickly, since they consider that there are many frauds with fake marriages, arranged with the intention of ensuring their legal residence (Green card), this means that if a person come in the United States with a tourist visa and if they marry within 90 days, is considered as a fraudulent marriage.

There are real marriage, between Americans, and foreign with American people, with good faith which are done with love and under the conditions of sharing together, living together, in an intimate marriage, meeting the marriage requirements, such as the legality of the marriage in the place where they were married, having single marital status, being of legal age or if not, the corresponding permission or consent (In some states they do not allow 3rd degree consanguinity ties, since it is seen as a marriage in bad faith) and proving that is a legitimate relationship without any problem, even more when the evidence is available for the immigration agents without complications and they do not have to go through the USCIS (Immigration and Citizenship Service) and the ICE (Immigrations and Customs Enforcement) who are responsible for investigating and punishing cases of fake marriage.