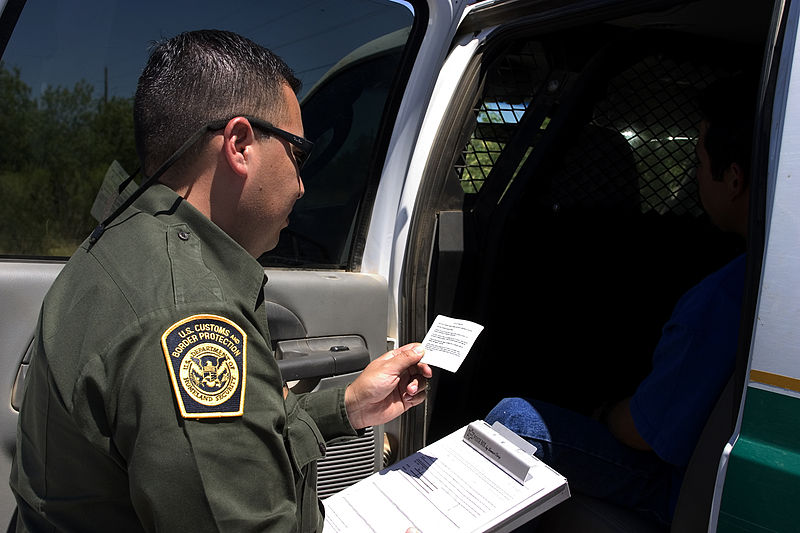 Marco A. De La Garza Jr. is the son of undocumented Mexican immigrants. They lived in Brownville, Texas, as he grew up Marco’s parents told him he was born a U.S. citizen.

Marco graduated high school and showed an interest in joining the Armed Forces. His parents tried to talk him out of it, he persisted. He said later that he realized he “was being selfish in my desire to serve my country that I had so loved.”

He joined the Navy in 2003 and served on the USS Greeneville, a nuclear submarine. He was honorably discharged in 2008. In 2012 he joined Customs and Border Protection. Over six years as a federal officer he did well, rising to become a squad leader the agency’s Academy in Georgia.

He attained a certain departmental notoriety when he ran out of a barbecue at his in-law’s house in Arizona when he saw a migrant man being pursued by the Border Patrol. He tackled the man and held him for the other agents.

Garza married, had two children, moved up in the ranks while passing dozens of security and background checks over the years.

In 2017 he applied for a passport. He didn’t pass that background check, it was discovered that Garza had, in fact, been born in Mexico in 1980, not Brownsville.

His birth certificate was authentic, but it was filled in with false information. A midwife had filled out dozens – maybe more – such birth certificates in the Brownville area for years in the early 1980s until she was finally arrested, though the authorities were not able to track down all the birth certificates she had falsified.

Garza had been born in Mexico, came to Brownsville very young, and was, himself, illegally in the U.S. Undocumented.

When he was a teenager, Garza confronted his parents after a particularly harsh argument over his joining the military. As he wrote for his pre-sentence report to the federal court, it was then that his mother, “told me that I had been lied to my whole life and I was and had been all along, a Mexican citizen. I refused to believe that to be the truth, and still came to America with my U.S. birth certificate that she had given me.”

He knew the truth, yet moved forward with joining the Navy. He says he felt he owed it his adopted country.

Before we go any further, we need to note right here that this is not an uncommon situation. At all. Parents are embarrassed, or don’t want to stigmatize their children, or just want the best for them, regardless, children who are brought to the U.S. by undocumented parents and are told they are U.S. citizens. They grow up believing that until … they find out different. Which has to be shocking.

Garza agreed to plead guilty to one count of passport fraud, the other two counts were dropped. Last week, he was sentenced to one year of probation and a $1,000 fine. The judge said that his service to the country “ought to count for something.”

There is no official word about whether or not he will face deportation, though his lawyer says that ICE has recommended he not be removed.